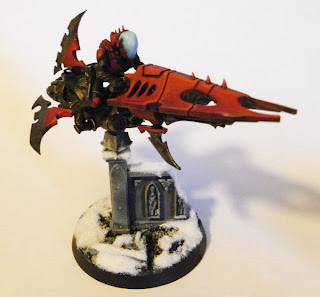 Well, I gave it more thought than was probably healthy, but I settled on the red scheme that I was pondering. Well, a variation of it, anyway. Thanks to anyone who gave an opinion; it all helped.
I switched out the red gore used in the test figure for blood red. I finished it off with a wash of baal red too, which makes the colour a lot more vibrant than my original. The bikes took a while, but infantry should be a lot quicker. I'm going to start on a squad of warriors next. 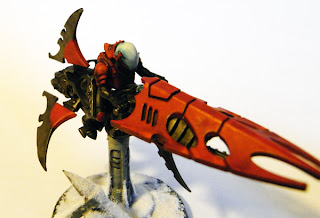 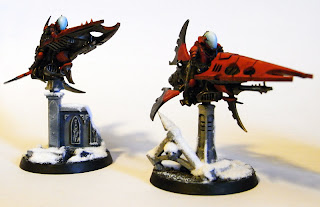 It is a rich red and it looks fantastic, especially against the darker colours and the white on the base.

Thanks!
I ended up with a lot more snow than I was originally planning tbh but like you say, I think it works well to bring out the red.

Love the snow, I think it makes a great contrast to the warm red of the bike.

Ron, From the Warp

Hey Ron, thanks for commenting! Posting these guys has given weight to a theory I read a while ago; snow bases make everything look a little better

Nice work! Im gonna jump on the comment band wagon and also say that the snow looks great! Im basing my DE on snow bases as well, but doing painted snow instead of the fluffy stuff. might have to revise that idea....!

Nice to see some Dark Eldar not in black