Plastic Archon, or getting the most from your Raider kits

One of my first and greatest 40k loves were, and still are, the Orks. I don't play them much at present, generally preferring the quick but fragile fighting style of the pointy eared race. However the Mekaniak spirit of attempting to bolt lots of different things together to form something new and hopefully better prevails.

The Dark Eldar range is fantastic for this. Lots of plastic kits with lots of different options means lots of different spare parts. The raider kits, especially, can be looted for spare heads, torsos and legs. This, coupled with my desire for an all plastic army, led me to build a plastic Archon.

First things first, gathering the bits. Archon armour isn't too different from regular warrior armour, so I figured with a few extra fancy bits (say, a cape), a dynamic pose and some nice equipment, I could make something suitably leader like. It's generally a good idea to blu tack your parts together before getting the glue out, so you can try out the pose and look of the figure before you commit. This is my first draft, if you will. 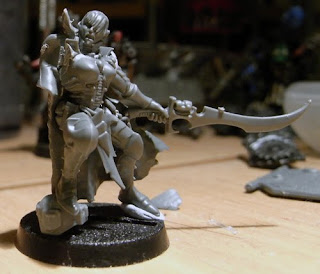 The parts used should be fairly obvious. The corsair cape needed a bit of hacking up to get it to fit with the Dark Eldar torso (and a bit more hacking up to get the head to fit), but nothing terribly drastic. I added the guardsman helmet because, hey, who doesn't love giving the Imperial Guard a good killing? 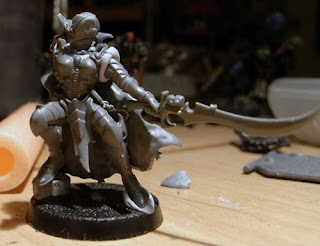 Here she is from another angle. At this stage (after some good feedback from others) I was able to figure out a few problems. Firstly, the partly squatting pose looks a bit off, so I moved her to be standing on top of a pipe. More dynamic, and balancing on something makes her pose look a bit more natural. Secondly, it was suggested that I shift her to be looking the other way. I'd not considered this, but when I tried it, I found the miniature flowed a lot better. The only major thing I needed to consider was the direction of her hair. Some needed trimming from her head, which was fairly fiddly, but a sharp knife and being careful saw my foray into plastic hairdressing a success. Some glue and a few extra bits and my new Archon is ready for the painting queue. 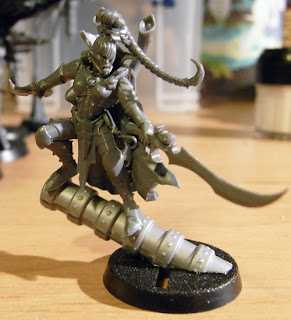 So, there you go, a fairly simple conversion, made entirely from spare parts, but in the end a nice dynamic miniature (I hope). Alls well that ends well.

I'm not the only one who's doing this, mind you. I came across this example that had been cooked up on a forum I frequent. Check it out: 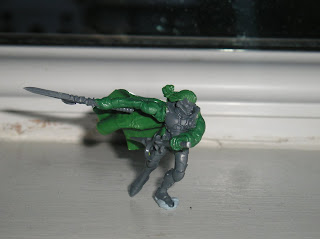 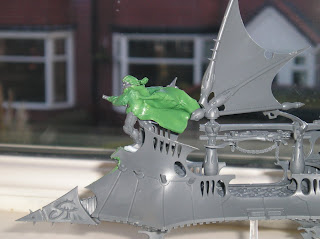 Somewhere, in the depths of my fantasy bitz box, a lone Dark Elf Corsair is complaining that someone has stolen his cloak. He's crying and says that he's cold. All his friends are laughing at him. Screw that guy though, it's his own fault for not being assembled yet.
Posted by Rob at 22:11