A quick rummage through this blog's archives will present you with the following obvious fact; I jump about between a lot of 40k armies. My brother is quite the opposite. Since just before 5th ed hit, he's been running his ever faithful Salamanders. He's dabbled in a few others (Death Guard, Flesh Tearers) but never strayed far from the power armour.
After he expressed an interest in the idea of a Haemonculi Coven army, I jumped on the chance. After all, I always like the opportunity to face something new across the tabletop. Fusing it with my need for Christmas gift ideas, I produced the following. 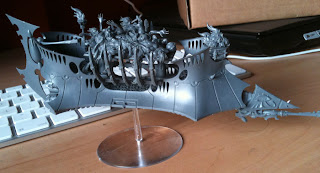 Quite expensive for a basic raider if you wanted to replicate this across a whole army, but I do like the way the pile of bodies replacing the sail changes the look of it. I imagine it hovering slowly through mists, Dark Eldar throwing bodies into it to be transported back to the laboratories of Commoragh. 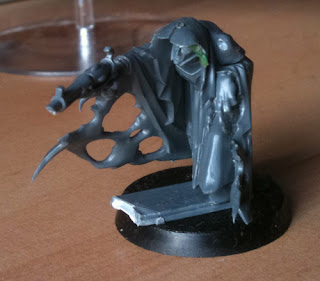 What's a Haemonculi Coven without a Haemonculus? I had this guy left over from the Corpse cart kit, and didn't want him to go to waste. He's obviously a Haemonculus that hasn't yet mastered the art of floating around looking regal.
Posted by Rob at 01:36

Nice conversion of the raider, looks suitably grotesque. That Haemonculus though is simply awesome. Probably the best Haemonculus I've seen, besides Urien Rakarth. I wanna see them painted.

Thanks!
I will endeavour to persuade my brother to paint them asap, and then take pictures