I've not dabbled with magnets before, but I was given some spares by a friend recently and figured I should put them to use. Magnetically attaching my Reavers to their bases seemed like the optimal choice.

Now, if you've not messed about with the Dark Eldar range personally yet, know that the abominations against sanity otherwise known as flying stands have been redesigned somewhat. They have a ball and socket deal now, which works a lot better. Which is to say, they now work as intended, and hold up the miniature without it spinning wildly in circles or falling over every time you think in it's general direction.

Well, this is the case for the larger vehicles such as Raiders. Reavers don't fair so well (I suspect however that I may have been lax in my pressing together the two halves of the bike with appropriate force duties, so it may be my fault). My jetbikes still suffered from falling over mid battle, so I decided to go with some scenic bases. The magnets enable me to disassemble them for easy transport. 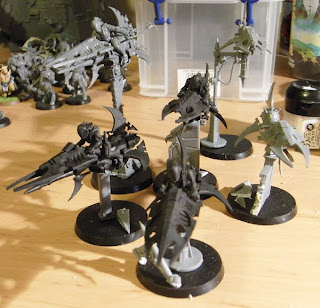 The scenic bases themselves ended up a lot taller than I would perhaps like, but finding scenery bits that are thick enough to support the insertion of a magnet whilst also being the appropriate hight turns out to be difficult, at least within the confines of my own bitz box.

Oh, and in regards to my previous post, I've settled on red.

So good not even my clod hopping hands couldn't break them!