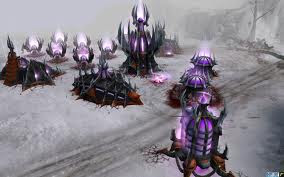 Ok, so at the moment my Dark Eldar are a fairly standard mechanized list. Everyone in boats, boats get them where they need to be.
However, since I first saw the Dark Eldar codex I've had a hankering to try a webway portal based army. It looks like it would be fun and unique to play. Less vehicles to paint wouldn't hurt either!

Working off some of the rumours as to what's going to be in the next wave of DE miniatures, I built the following list. 1500, naturally.

Some of the wargear probably needs tightening up, and I'm not sure about the scourges, but overall it looks like it would be a fun list to play. What do you guys think?
Posted by Rob at 00:24