Making some slight progress with painting the horde!
Something a bit bigger than clanrats, anyway.

Been pretty busy this week with finishing off various studies and preparing for a immenant trip to Tokyo (first time ever visiting, wooo! but I digress), so no progress on the skaven, sadly. I've got a few days before we fly off to kick out some miniatures however.

Today, though, was Gamesday (well, it's now the morning so technically yesterday was Gamesday). Last year was the first time I'd been since I was a kid, and while fun, it was a little disappointing to be honest. This year, however, was super-awesome! If you care at all about the sorts of things that were being shown you've probably seen them already on other people's blogs or wherever. I won't bother re-posting them. I figure if I'm going to make sporadic, late posts, I may as well keep the content original, right?

So with that in mind, here are a couple of photos I took.

Culexus costume! The eyes were all glowy and everything!

Had a busy few days, but now it's time to knuckle down and get on with the important stuff. Painting Skaven!

I churned out the front rank of my spear rats in an evening. Quick and dirty, pretty much just base colours and then a brown wash over the top. I'll put a little more love into the non-clanrat units, but there are so many of these guys I have to prioritise quantity over quality. Took me a couple of hours to get this rank done, but I think I can trim it down now I've worked out what I'm doing with regard to what colours go on first, etc.

Dark green is the army colour, so will be showing up to some degree on every miniature. Clan rats will be rocking a green/grey/brown colour palette, while fancier units (say, Stormvermin) will probably be green/black/bone. I'm going to go back and add some flock to the bases as well, but I'll probably do that in bulk once I'm done with all of them.


I'm not going to get very far painting 5 at a time, so it's time to overcome my biggest fear. [b]Batch painting.[/b] [i]*dramatic music and thunder*[/i]

Not terribly exciting but slow and steady progress with my skaven. I've tidied up, de-mold line'd, stuck together and based my first block of Skaven. I'm gunna go undercoat them all, and then the painting can begin!
This is what 500 points of skaven looks like. There's quite a few of them.

The loathsome Ratmen and all their Vile Kin

Right, so more Warhammer. No Beards this time. I've had a single proper game with my Dwarfs, and they're about half way assembled, no idea on a colour scheme yet. Obviously the perfect time to start a Skaven army.

8th ed has roused the interest of a fairly large portion of the club, and there is an escalation league starting up. 500 points a month, basically. We've got a pretty good spread of forces at the moment (which is good, as with 40k it's about 80% space marine on any given day). Empire, Dwarfs, Brettonians, various flavours of Chaos, some Lizards, a Vampire horde, and no doubt some High Elves. Dark Elves still have a bit of a bad rep around these parts, so I figured I'd step up and go for it with my Skaven. 500 points at a time should help me from going too mad with buying too much stuff, although it remains to be seen whether I can actually paint a hundred or more clanrats. Yikes!

I've never played Skaven before, though I've always liked their background. All their new miniatures (especially Island of Blood) tipped me over the edge. The plan is for this to be an entirely plastic army (seriously, fuck metal miniatures. I'm carrying this army around in a bucket!), mostly made up of Clans Skyre and Moulder. Maybe some Eshin (or maybe they're there already and you just can't see them). Not a big fan of Pestilens, though.

Here's some background I scribbled up:

Chief Rattagantz. Low ranking general of a low ranking clan, bottom of the pile of filth that is Skavenblight. A rat with big ambitions, though. Called upon by the warlocks of Clan Skyre, Rattagantz is sent forth into the world of men. One of their own is missing, the mad* recluse Iklas Quezla. Rattagantz is to find him, and more importantly, find his work. If the rumours about this Enginseer are true however, Rattagantz may just have found his way to the top of the pile. A few of his most trusted** clanrat warriors, a few "gifts" from clan Skyre, and a few favours he was able to negotiate from clan Moulder, and Rattagants is off to find his destiny, or die trying***.


Finally, some pictures! Nothing painted yet, but a few characters destined to lead heroically from the back.

Chieftain Rattagantz. Removed the back banner and gave him some new arms. The arms attach in a bit of a weird way, and I had to mangle the previous shoulder pads something fierce to get the new ones on, so some greenstuff to tidy him up is in order.

I imagine at some point sooner rather than later I'll want a BSB, so here he is. Gave him a new head to make him a little different to Rattagantz, and did some minor repositioning of his cleaver arm so he'll actually rank up. His back banner isn't the most impressive army flag in existence, but the overall hight combined with the brazier on top should make him stand out nicely on the tabletop.

Finally, the mad genius behind all the warp technology I'll be hopefully using to wreak havoc amongst the surface dwellers. Iklas Quezla, clan Skyre Warlock Engineer. Not sure what to do with the pipe from his gasmask. Might just lop it off. 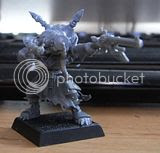 Axes at the ready!

Well, earlier this week I got to try out my first proper 2k game with the angry, bearded ones, against Alistair's High Elves.
Luck was certainly on my side (or, perhaps more accurately, and absence of luck on his. See something like 30 arrows killing a single dwarf thunderer and various other High Elf mishaps), but I certainly think the core of my army is the way I want it.

Thane
-BSB, Runic Standard of Grugni (5+ ward save against missiles to anyone within 6")

The basic HW/Shield warriors were my "sacrifice block", in that I threw them in the path of the nastiest thing on the board (in this case, Sword Masters). Their decent T, Save, Parry save and numbers meant they held strong for a couple of round of combat before breaking, which gave the rest of my army time to get things done.

The strong core of Long Beards had good survivability, and with higher S and WS than normal meant they steadily ate their way through the block of spears I had them fighting. The BSB went in this unit, and I think it's a solid anchor point to my army.

Finally the lord went in with the GW warriors, and pretty much failed to get into combat after the Organ Gun destroyed everything they were trying to fight. We did a quick couple of theory rounds with them taking a charge from some dragon princes once the game ended, and I think they held their own pretty well. They've got enough numbers to take some casualties, and S5 should be enough to bring some foes down with them.

I'm not settled with the shooting phase. I think dropping the quarellers and getting some more warmachines will be the eventual plan, but for now they're doing ok.
I need to play with the runes on my characters a bit more though. The ward save against shooting was OK, but I think giving my BSB survivability in combat will be more useful.

Now to get on with painting the bearded little drunkards.
Posted by Rob at 16:34 No comments: