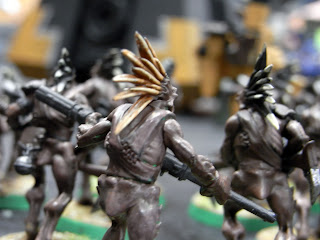 Note: My own Tau are half painted by my wonderful Girlfriend, half proxied miniatures, and entirely unphotographed. Instead, I shall pepper this post with images of my good friend OtherRob's Tau, from the Cheltenham Warchiefs gaming club.

It's been a while!


I have been pretty busy with an upcoming massive move and life-change (watch this space for more info) which has rendered my usual intermittent hobby output even less...mittent. Lots of games played, but I've not been painting or buying much. The move is possibly short term (a few months) but it may well end up being a full year. It's also overseas. Obviously, this means my tonnes of miniatures won't all be able to come with me. I decided early on that I'd take a single army with me, and I've been working over the choices in my head for a while now (yes, I think about important things like this). I think I've settled on taking my Dark Eldar. They're plastic (thus, light), mostly unpainted (so even if I don't get much gaming done I can channel my hobby energy into painting them), and they also tick the all important "evil pointy eared space elf" box.

I've been cycling through all of my various armies, trying to get some games in with each of them before I depart. This is the first of a possible series where I talk a little about each of my most common lists. 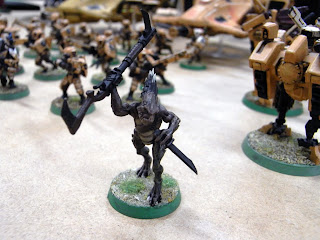 Today, my experiments with the Tau!
Tau were, for me, an early idea for an army to take with me. They're a very different play style to my usual (I normally live for the assault phase), but wrecking faces with Rail Guns is certainly awesome. In the end I decided against taking the army beyond my experiments because I'd still have so much to buy. If the rumours are true about them getting a new book sooner rather than later are true though, I may have to join the greater good permanently! 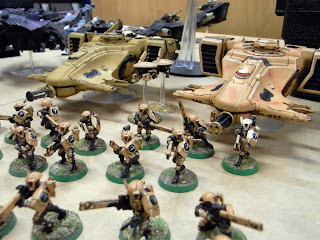 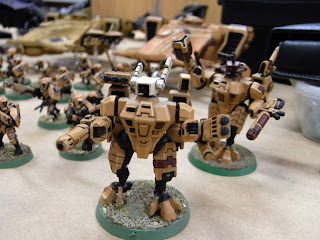 Pretty simple stuff.
So far my Pathfinders have consistently been shot and immediately broken, but I think their markerlights are too useful not to have them in the list.
Kroot are a useful distraction/sacrifice unit, and I love them. Bigger squads would be nice, but I can't afford them.
It might be worth dropping the SMS on the hammerheads and using the points for something else.

Anyway, that's my take on the Tau! Kind of an epic and rambling post.
Posted by Rob at 22:42